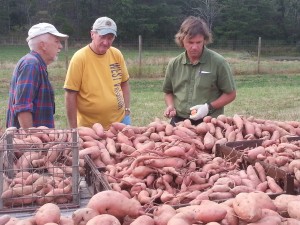 Robert “Lin” Dunham has farmed Broom Grass hay for 40 years in Morgan County, WV. Lin is currently a Chairperson of the Eastern Panhandle Conservation District and the Chairman of the Morgan County Farmland Protection Board. Lin decided to approach the cost share program to enhance the sustainability of his farm. Through the cost share program, Lin has had an irrigation pond and deer fencing installed at his farm. While he hopes to have the irrigation lines in place by 2015, the current trial did not receive watering beyond rainfall.

Lin was approached by Larry Lower with the Morgan County Association for Food and Farms to join MCAFF’s New and Developing Farmer Program. Together with guidance from Lewis Jett, WVU’s Commercial Horticultural Specialist, they worked on a field trial of Beauregard sweet potatoes on Lin’s farm in Morgan County, WV.

After the planning process the total area utilized for the sweet potato trial was 0.18 of an acre. 1,000 Beauregard sweet potato slips where planted on June 5, 2014. After planting occurred an application of Devenall herbicide was sprayed as a pre-emergent weed control. Two weeks after planting the hills were side dressed using a 30-10-10 fertilizer. No other herbicide or fertilizer applications were applied.

On September 15, 2014 the vines were removed by using a weed-whacker and hand clipping with pruners. September 16, 2014 Lin plowed out the potatoes and cured them for a total of 7 days. Lin used a flat bed hay wagon, a few tarps, and a bucket of water for the curing process. A total of 920 lbs. of sweet potatoes were harvested.

Lin used multiple marketing avenues and technics to sell his sweet potatoes. He sold half of his crop with assistance from MCAFF to the Morgan County Schools. He also utilized the community consignment booth at the Berkeley Springs Farmers Market. The 2014 retail price for sweet potatoes ranged from $1.50 to $2.00 per pound.